In films and TV Series, the creation and delivery of a high-quality As-Broadcast script is a large part of the post-production transcription process.

As-Broadcast Scripts are an essential element in the post-production process. These scripts are written to match the final edited and broadcasted version of a TV or radio program. It represents the final version of the program that will be aired or distributed to the audience. This script is a detailed document that outlines the exact dialogue, actions, and auditory(for radio programs) and visual(for TV programs) elements that will be included in the final product.

It is important to make media accessible to a wider audience as the international market can generate more sales than the domestic market. As-Broadcast Scripts are particularly useful in creating subtitles and closed captions for different languages and making the media access to a wider audience. These scripts are used as a reference for creating accurate and in-sync subtitles, closed captions, and translations that match the dialogue, actions, and visual elements of the final product.

Given the importance of As-Broadcast Scripts in the legal and regulatory aspects of post-production, it is essential for filmmakers and TV producers to ensure that they are of high quality. This includes ensuring that the scripts are accurate, complete, and clearly written, as well as ensuring that they are properly formatted and contain all of the necessary information.

As-broadcast scripts are a crucial aspect of post-production, as they are used to ensure that the final product adheres to legal guidelines and regulations. This includes ensuring that the content does not infringe on any copyright laws and that it complies with any other relevant laws or regulations. For media companies, As-Broadcast Scripts serve as an important tool for protecting themselves from potential legal issues.

Therefore, having a well-drafted As-broadcast script can help to demonstrate that the company has taken the necessary steps to ensure that its final product is legally compliant.

These are mostly used for scripted television, but they are also used in the final delivery process to a network or studio. They are frequently used in the creation of a Combined Continuity Spotting List (CCSL). 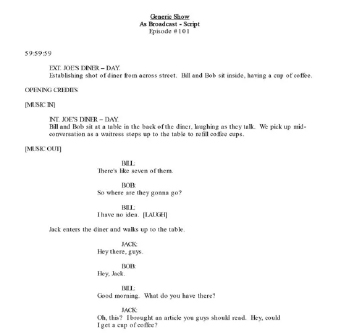 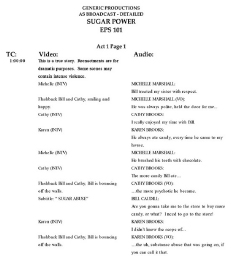 Extensive experience with creating As-Broadcast Scripts is essential in making the post-production process seamless and efficient. A non-professional may incorrectly handle technicalities such as, for detailed style ABS, making sure that the video and audio elements are accurate and in sync with the time codes, and for script style, ABS, making sure that the time codes are in 1-minute increments as well as in sync with the dialogue. These things are details that are easily overlooked by the untrained eye and, therefore, can cause problems throughout the post-production process.

Additionally, a lack of experience and patience may cause inaccuracies in transcription, leading to issues with distributors. An untrained person may also not be able to identify and fix errors that occur during transcription, resulting in inaccurate As-Broadcast Scripts. Our team is well-versed in these techniques and is able to produce high-quality as-broadcast scripts with minimal errors.

At Daily Transcription, we have a wealth of experience in providing As-broadcast Script Services. Our team has worked with a wide range of networks, production companies, and broadcasters, giving us a level of expertise that is unparalleled in the industry. Our attention to detail is second-to-none, and we take great care in ensuring that our as-broadcast scripts are accurate and error-free.

Additionally, we understand the importance of timing and budget, which is why we offer our services at a very reasonable cost and turnaround times, all while ensuring that there are no errors that may cause issues with distributors.

In conclusion, As-Broadcast Scripts are an essential tool for ensuring that the final product matches the intended vision of the producers and creators in the production process of film, live television, TV series, and radio.

Daily Transcription is a leader in the field of As Broadcast Script Services, as well as other post-production transcription services. Our team is highly skilled and experienced, and we take great care in ensuring that our as-broadcast scripts are accurate, error-free, and delivered on time. Feel free to contact us to help assist you in figuring out what type of script best fits your needs.