Beth Levison
I am indebted to Ralph Noe and his team at Daily Transcription. I was in a pinch, needed a dialogue list for an international sale, and Ralph and his team delivered one on an incredibly fast schedule. It was accurate, typo-free, done with an exceptional level of detail, and exactly what we needed. I will definitely return to Ralph and Daily Transcription for any of my transcription or dialogue needs moving forward.

Shot Glass - Los Angeles Video Production
We’ve been using Daily Transcripts for 10+ years for our corporate interview projects. Ralph and his team are amazing! Even if there are other automated transcription services in the industry, we still prefer them over any other vendor. Their service is impeccable.

Greg Tiefenbrun
I've been working with Daily Transcription for years. They always do a fantastic job, are super easy to work with, very communicative, and, best of all, they are very nice!!!!

David Lawrence
The team at Daily Transcription have been immensely helpful in providing us our very urgent transcriptions in a timely manner and are always accurate. They are always on top of getting back to us with very timely responses and can always adapt to our requests. Been a total pleasure working with them on our production needs.

Anthony Shabazz
Top notch in all areas. Will use them any time I get a chance.

Jennifer Phillips
We have been incredibly happy with the service, accuracy and turnaround times provided by DTS. I have lost count of how many projects for which DTS has provided detailed As Broadcast Scripts and captions. The communication with our salesperson, Ralph Noe, and his team is excellent.

Patricia Sanders (No nickname)
As a professional I had a great experience with the great work they did for me on a Zoom hearing and subsequent work.

Janette Baird
I have used Daily Transcription across a number of projects. They provide excellent and accurate transcription services. The turn around is fast, and the staff are really helpful.

What is it and what is it used for?

Distribution of a film often requires a Continuity List as a requirements between the post-production company and the network / studios. Additionally, they provide a legal description of your project for copyright purposes as well as a script for foreign language dubbing and other localization services.

We offer professional and accurate post production script services including continuity spotting lists for your film, television show. However, Continuity lists are a delivery requirement between the production companies and the network / studio, serving as the legal description of the production for copyright purposes. Moreover, they are also used as a guideline for closed captioning, subtitling, and dubbing needs. Furthermore, these specialized scripts are also necessary for foreign distribution.

These scripts need to be precise, so they are the most time consuming post production transcripts to produce because they include verbatim transcription, shot-by-shot scene descriptions, and camera cues all to the frame. Subsequently, Daily Transcription’s vast post-production script services experience makes us the company to trust with your continuity needs. Nevertheless, Our professionals are experts at creating continuity spotting lists as well as will assist you in figuring out what type best meets your requirements: 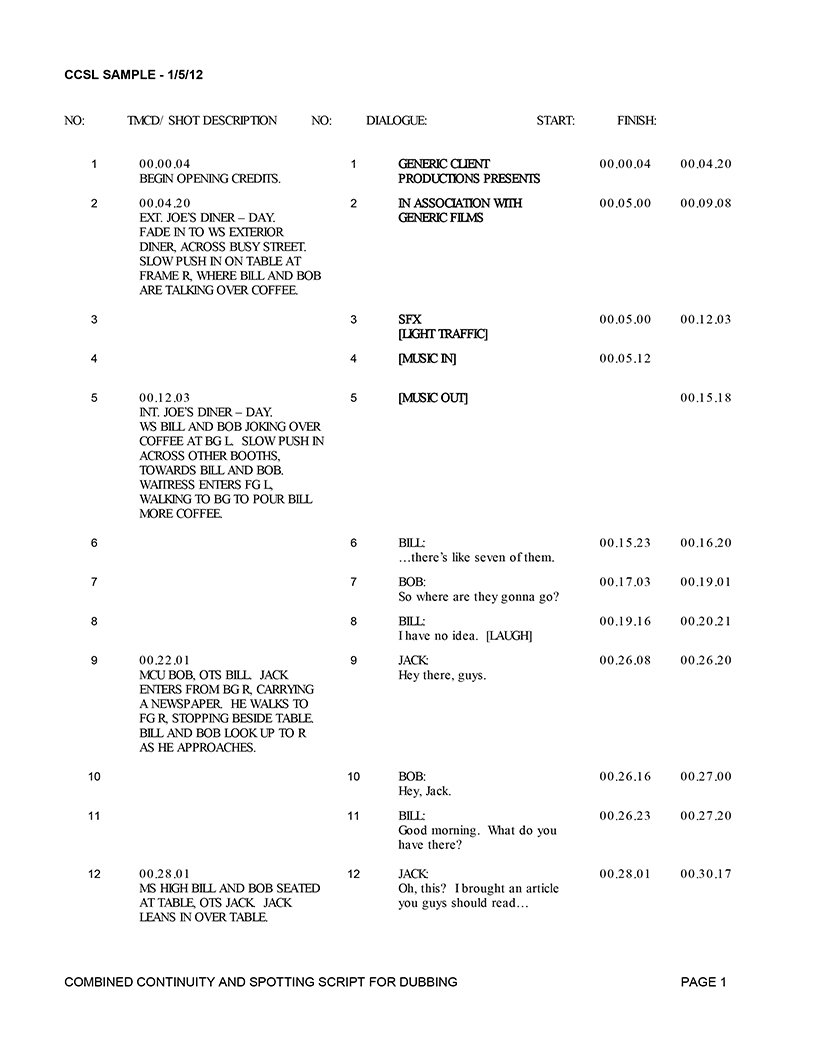 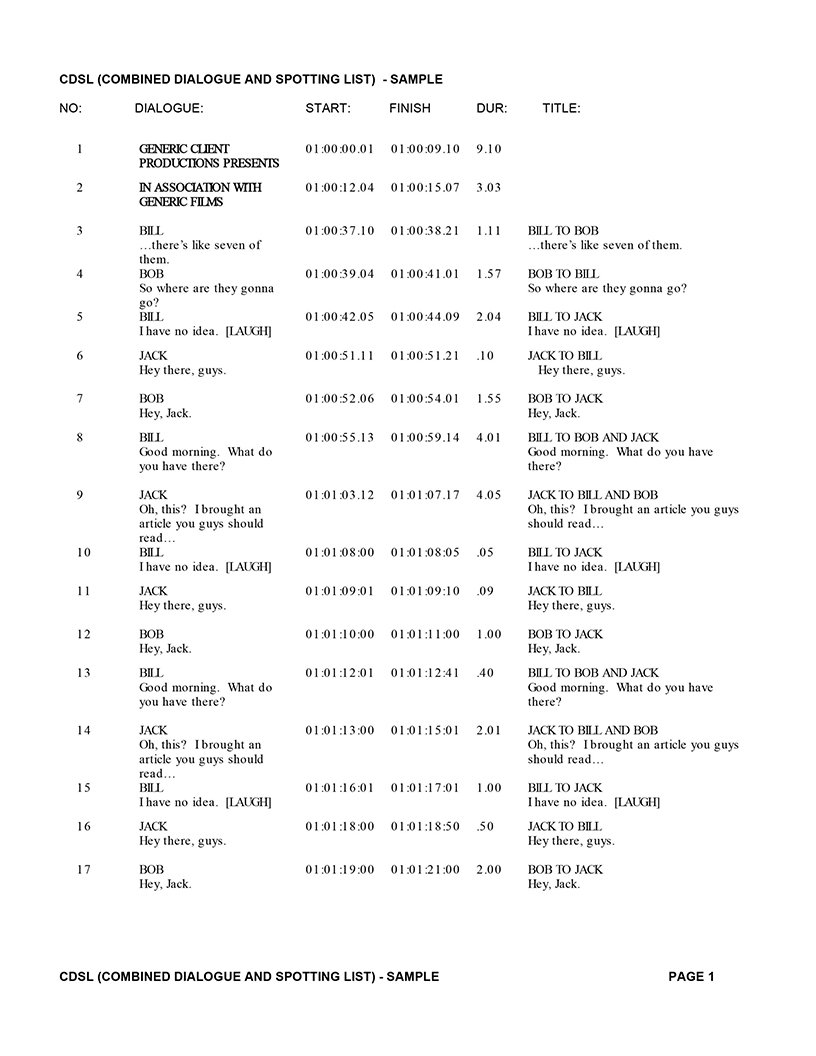 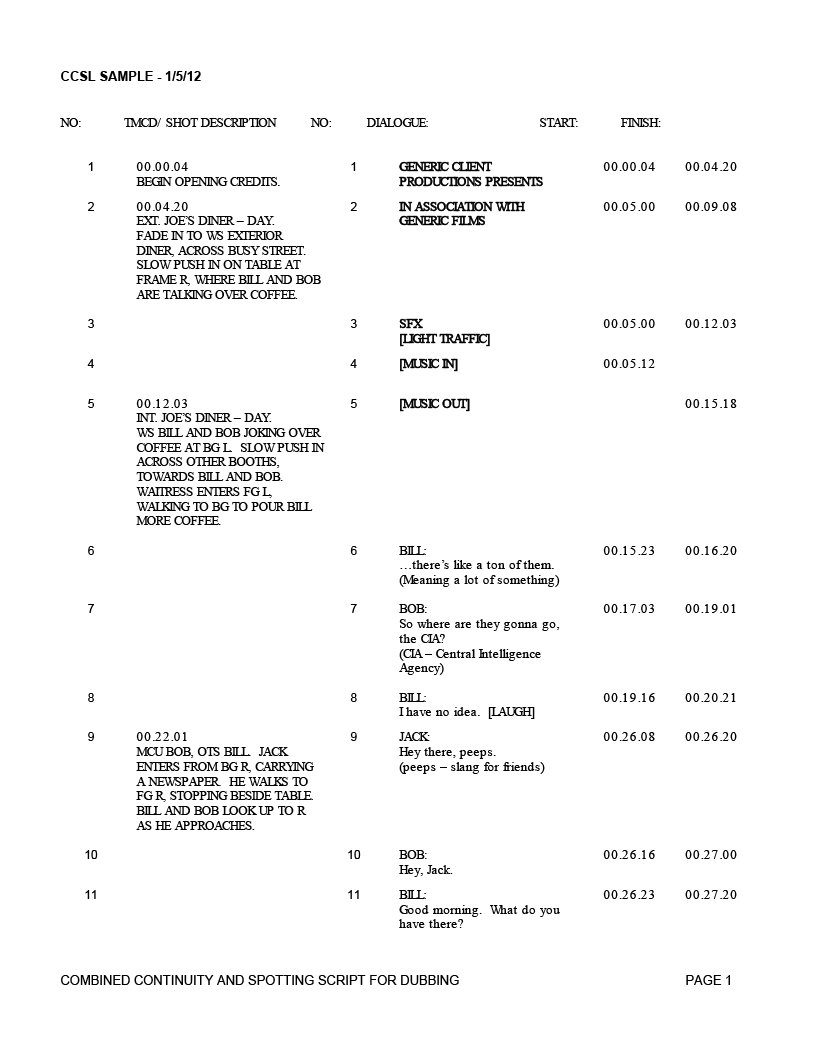