Ensuring accuracy and consistency in the final product are crucial in the film and television industry. Continuity Lists play a vital role in achieving this goal. These lists provide detailed information about the specific elements of a film or television project, such as the dialogue, sound effects, and music, as well as the timing and order in which they appear.

Continuity Lists play a key role in the post-production process, helping to ensure that the final product is of high quality and meets the standards of the industry.

Continuity Lists are an important document used in the post-production process. They are primarily used as a delivery requirement between production companies and distributors, serving as a framework for translation and foreign language dubbing.

It is important to make sure that international audiences, as well as the deaf and hard-of-hearing community, can have access to films and TV series, and this is where the Continuity List can come in handy. They are vital for translation, dubbing, subtitling, and closed-captioning work as they provide a detailed framework of the film or TV series. This detailed framework is used to ensure that the final product is accurate and consistent in various languages and audiences. For example, if a scene is subtitled in Spanish, the continuity list can be used to ensure that the subtitles match the dialogue and sound effects.

As mentioned, Continuity Lists are required by several production companies and distributors for various purposes such as for translation, dubbing, subtitling, closed captioning, as well as legal compliance. However, there are different types of Continuity Lists. How do you know which one your post-production team needs?

A Dialogue Continuity Script is a comprehensive transcription of all the dialogue that occurs in a film or a TV series, including the specific scene where it takes place. It has all details about all the pertinent components of the dialogue, including all spoken dialogue in verbatim, frame and shot numbering, character names, voice-over indications, overlapping dialogue, on-screen texts, sound effects, music cues, and timecodes.

The main purpose of this type of script is to provide captioners with all the necessary information for creating closed captioning, subtitles, and dubbing. This ensures that nothing important is missed in the process and that the final product accurately reflects the dialogue in the film or TV series. All HBOMAX series require this style script. 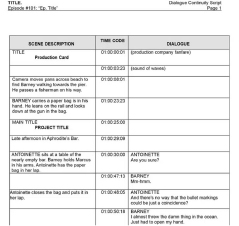 A Combined Continuity and Spotting List or a CCSL is a comprehensive document that details all the elements of a film or TV series in written form. It includes scene numbers, brief descriptions, dialogue, speakers, timecodes, scene headlines, scene descriptions, music cues, on-screen texts, and more.

Overall, in addition to being a requirement for distributors and Studios, the Combined Continuity and Spotting List is an essential tool for ensuring the quality and overall cohesiveness of a film or TV series. 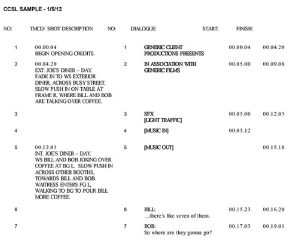 A CDSL, or Combined Dialogue and Spotting List, is a document that contains all the spoken dialogue and subtitles of film and TV productions.

The CDSL also includes speaker identification, description of movement within shot, scene headings, indication of voice overs, indications whether the speaker is on-screen or off screen, overlapping dialogue, music cues and sound effects, and credits list. 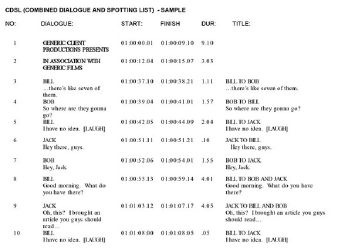 Creating Continuity Lists requires immense detail orientation and precision. To a non-professional, this task can not only be difficult, but also time consuming. If certain technical aspects are not handled properly, mistakes may occur that will negatively impact the entire post-production process.

Which is why it is crucial to hire experts with experience with Continuity lists and other post-production transcription services. A skilled individual will be able to transcribe the dialogue quickly and efficiently, making sure the post-production process proceeds smoothly and on schedule. They will be familiar with all the intricacies involved in transcription, such as the various file formats required for different distributors, etc.

Continuity Lists are an essential document in the post-production process of film and television. They provide a detailed framework of the film or TV series, ensuring that the final product is accurate and consistent in various languages and audiences.

In summary, Continuity Lists ensure legal compliance, consistency, and overall cohesiveness of a film or TV series and provide a crucial framework for translation, dubbing, subtitling, and closed-captioning work. If you need help determining which type of Continuity List is appropriate for your project, feel free to contact us.